Following its premiere in Dublin two weeks after Easter in 1742, Messiah quickly became a favorite oratorio throughout English speaking countries.  It is typically performed during the Christmas season, but this year the FCC is returning Handel’s most famous oratorio to its original season, the Spring.

A work of profound pain, joy, and grace, Handel’s Messiah tells the story of Jesus Christ, from the prophecy of his birth, through his death, ending triumphantly with the Resurrection.

Messiah was composed in an astonishing 24 days and was an immediate commercial success. It is a particular tour de force for the chorus, rich with extraordinary music, emotional impact, and uplifting messages.  Objectively a liturgical piece, Handel’s focus was on humanity’s earthly relationship to the Divine. The joy manifested in the Hallelujah Chorus in unequivocal. King George II was supposedly so moved during the London premiere that he stood, followed by the entire audience. The practice of audiences leaping to their feet whenever the Hallelujah Chorus is played continues to this day. A Requiem for the Pandemic FCC remains committed to the health of and safety of our members, performers, audience, and supporters. All participating Chorale members are fully vaccinated and wearing masks. FCC is adhering to all local covid requirements, and rigorously following all mandates from the City of Norwalk and Norwalk City Hall (NCH). NCH fans and filters have been upgraded to meet new covid-related standards. All audience members, regardless of age, must provide proof of full vaccination and identification prior to entering the auditorium; wear masks at all times and maintain social distances. FCC appreciates everyone’s commitment to caution and prudence, and thanks you for your cooperation as we strive to maintain the safest possible conditions for our live performances. Vivaldi’s Gloria
A unique digital performance of Vivaldi's choral masterpiece: GLORIA. A deconstruction. A rebuilding. A collage. A dance. A rebirth.

In December 2020, FCC reached an audience of over 3,000 across five continents with its stunning and layered digital performance “FCC Presents, Gifts”. We are thrilled to bring Vivialdi’s “Gloria” to life on screen this April 2021.

Blending tantalizing visual textures and manipulations of the camera with the vibrance of Vivaldi’s composition and elements of contemporary music, FCC’s GLORIA is a visual and auditory celebration of joy and the promise of tomorrow.

We will be offering this special online event for FREE, but request a reservation is made to gain access to this event.  Please click on the Buy Ticket button to Register. 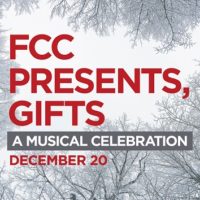 In honor of this Season of Lights, join the 100-member Fairfield County Chorale for a unique online streaming event — FCC Presents, Gifts — offering an artistic and meaningful exploration of choral music in a digital setting with a truly global reach.

We will be offering this special online event for FREE, but request a reservation is made to gain access to this event. Due to the coronavirus pandemic, we have cancelled our May concert. with the
Fairfield County Chorale Orchestra With the Fairfield County Chorale Orchestra Join the FCC as we wrap up our 2018-2019 season with Felix Mendelssohn’s iconic 1846 masterpiece Elijah. Widows, queens, priests, prophets, and an angel — Elijah’s vivid biblical narrative has all the drama of an opera. Don’t miss this chance to hear Mendelssohn’s Romantic-era take on the Baroque oratorio.